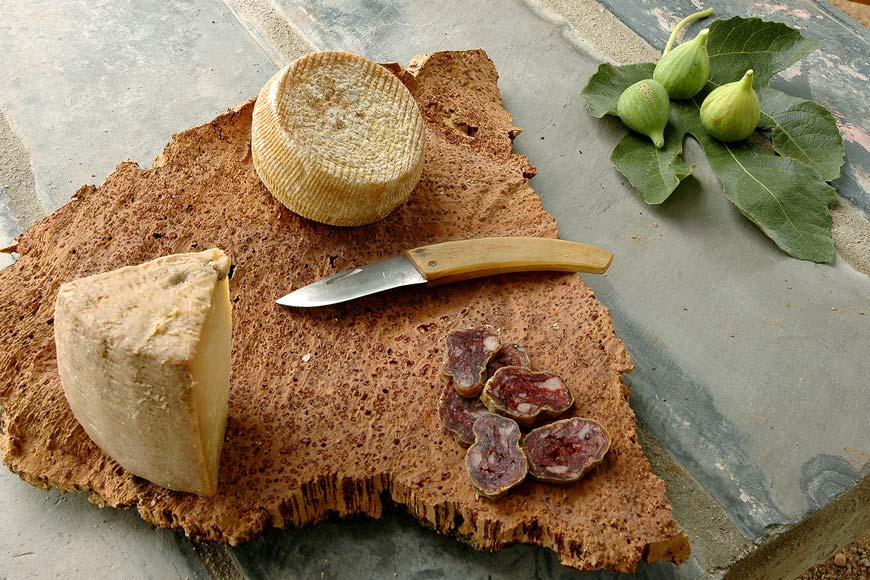 Corsica, other than its incredible landscape, has so much more to offer, as you will notice during your Corsica walking tour or Corsica cycling trip. Thanks to its unique identity, lifestyle, language and customs, Corsica has developed its very own gastronomy, with some aspects of it under strict protection: indeed, there are several AOC / IGP in Corsica, to protect their beautiful differences, that enriches the melting pot of cultures in France. Here are our 5 Corsican specialties that we advise you to try when enjoying a Corsica cycling holiday or a Corsica walking trip!

When speaking about Corsica, the image of its charcuterie comes straight to the mind of many people as it is famous to be one of the best in the world. And it is true!  Protected by what is called an A.O.C. (“Appellation d’origine controlée” – Protected designation of origin), the Corsican charcuterie should definitely be part of your Corsican adventure. Discover the “Coppa di Corsica”, Corsican coppa, salted and dried, to taste its smoothness, faint butter and chestnut flavour, perfect to eat during an aperitive, with a local “Pietra” beer!

Other than the coppa, don’t forget to try the “Prisittu”, dried ham, the “Lonzu”, similar to the coppa and the “Salciccia”, the local saucisson!

The local charcuterie is a very important part of the Corsican cuisine and are only available during a few months every year: as the producers starts making them in October, to taste an authentic Corsica charcuterie, the best time will be to travel between March and July! 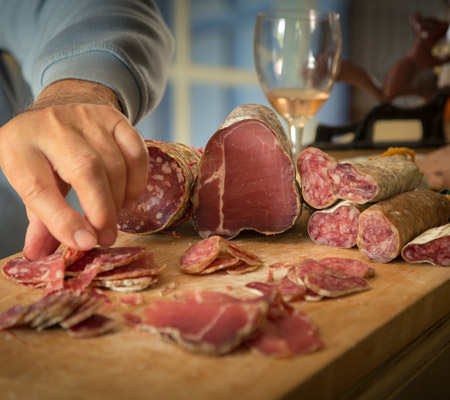 The most iconic and used component of so many recipes in Corsica that it would be impossible to count them all, the Brocciu is a smooth and delicate goat cheese, used every course of the Corsican cuisine. From starters to desert, this cheese is protected by an “AOC” and “AOP”, this cheese is what you must try when in Corsica! As Emile Bergerat - a French poet -  once said, “You do not know Corsica if you have not tasted Brocciu”!

As it was, at some point, part of Genoese territory, during its rich and tumultuous past, pasta is big in Corsica and very similar to what you will find, pasta-wise, in many regions of Italy. With similar recipes, but with local products added, pasta is very good choice if you would like to understand the rich Corsican gastronomy culture.

The Canistrelli are small dry biscuits that have been made in Corsica ever since the middle age. Used for breakfast, as a dessert or a snack, this biscuit that was “famous for its legendary hardness” has now become one of the most appreciated biscuit that can be found on this island. Formerly used by shepherds and timbers, these biscuits have developed and been declined in many flavours: from anis to chocolate chips, this biscuit is a must try when travelling in Corsica: it is very easy to take with you during your cycling trip or walking tour!

The Migliacci is a savoury specialty of Corsica. On a pizza base, but with brocciu and chestnut leaves on it, this local “pizza” can be found more or less everywhere on this island. It is definitely a fan favourite for Corsicans!